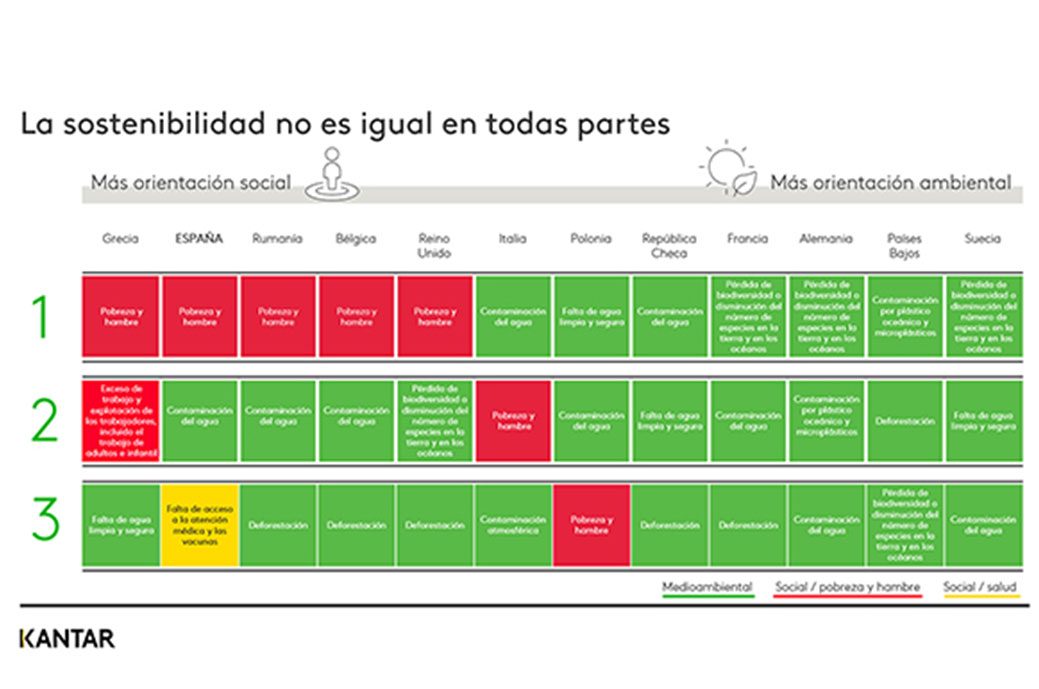 According to Kantar Foundation Sustainability Study, carried out in 35 countries to more than 35.000 consumers, sustainability is very present in the consumer's mind. The study also makes it clear that the transformation will be led by the regulatory push of the institutions and the initiatives created from the brands. In fact, 6 out of 10 European consumers believe that sustainability is not their responsibility, but depends on companies.

Thus, the consumer feels that it is companies and brands that should take responsibility for tackling society's problems in the environment of sustainability and 60% believe that companies must make business sacrifices to end racism, xenophobia and other forms of hatred, even at the cost of losing a brand, advertising icons or business. In addition, 51% believe that brands have an important role to play in social conversation on topics such as gender and race equality or relations with immigrants. In line with this, the consumer is also willing to punish brands that they do not consider sustainable and 42% have stopped buying products or services due to their high environmental impact.

The study also shows how the way brands approach sustainability should be done with some care, to overcome the cynicism that has settled in the minds of consumers. 65% are concerned that brands are involved in social problems only for commercial reasons.

The study data reveals that while some people are genuinely committed to sustainability, they still need help to bridge the gap between what they think and what they then actually do, the so-called Value Action GAP.

82% of European consumers say that when they buy, their priority is to save money rather than save the planet, and 51% want to do more to be more aware of the planet and the environment, but their daily priorities are put first . These barriers of convenience are joined by others related to price (75% think that sustainable or ethical products are always more expensive) and lack of information: 70% think they do not have enough information on how ethical or sustainable are the products.

The importance given to sustainability issues varies by country and very specifically according to the proximity of the concern to the reality of the consumer. While countries such as Sweden, the Netherlands, Germany or France have a greater orientation towards environmental aspects such as the loss of biodiversity or decrease in the number of species on land and in the oceans and deforestation, other countries give greater concern to social issues such as poverty and hunger or poor working conditions. This is the case of Greece, Romania, Belgium or the United Kingdom, in addition to Spain, where the mention of the lack of access to medical care and vaccines also stands out among their three main concerns in terms of sustainability, a problem that does not appear among priority for neighboring European countries.

Specifically, in Spain poverty and hunger are the areas of greatest concern, followed at a certain distance by water contamination or lack of access to medical care. This is followed by the loss of biodiversity and poor working conditions related to exploitation or overwork.

New cardboard packaging for MakeUp Eraser
7 years ago MakeUp Eraser created a sustainable product to remove makeup. Continuing its effort to reduce plastic waste, its plastic packaging is now replaced by a box ...
Eco-warrior: Quadpack's new biodegradable, recyclable and reusable packaging
Quadpack Eco-warrior is a complete container with the minimum number of components and a compostable and recyclable cap. Eco-warrior seeks to be respectful with the environment and consists of a bottle of ...
Veuve Clicquot x K-WAY® Ice Jacket
The maison de champagne Veuve Clicquot x K-WAY®, the original fashion brand of colorful and waterproof outerwear, come together in an original limited edition. This collaboration leads to a ...
Six new covers for Rouge G Luxurious Velvet by Guerlain
The new Rouge G Luxurious Velvet collection from Guerlain features a velvety matte finish formula, presented in 15 intense shades and, for the first time, with six new cases dressed ...
Deluxe packaging for Redbreast whiskey
GPA Luxury manufactured a bottle holder that doubles as a hanging bird “feeder” for Redbreast Irish whiskey. This limited edition came to life as part of a campaign by R ...
Butterfly Cannon creates a new packaging for Oriflame Cosmetics fragrances
Signature is the latest fragrance from Oriflame Sweden, crafted by their master perfumer together with their own son. Oriflame asked the agency Butterfly Cannon to create a brand around this hi...