The United States, France and the United Kingdom, the countries with the greatest commercial opportunity for Spanish industrial companies 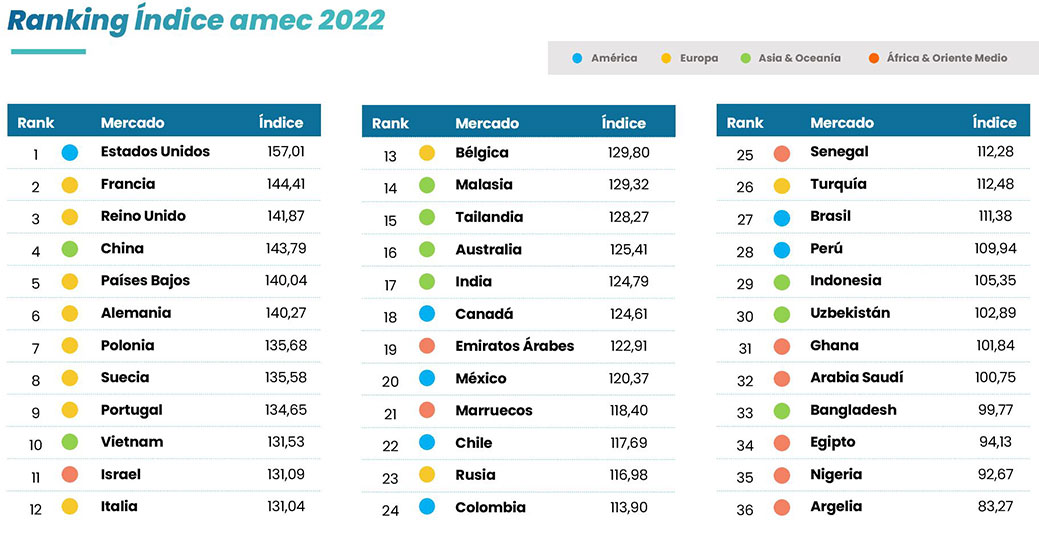 El Prospective Report 2022 de amec, which includes the Market Ranking, indicates that the great opportunity for Spanish industrial companies next year lies in the recovery plans and the commitment to industrialization throughout the world.

El Observatory amec publishes for five years the Prospective Report to detect where the opportunities for Spanish industrial companies will be in the following year, which includes the Market Ranking, a ranking of countries with the greatest commercial opportunity, different for each industrial sector, to serve as a tool when preparing their strategies. The United States, France and the United Kingdom top the Markets 2022 ranking.

On this occasion, the report highlights that, above opportunities in certain markets, there are five factors that are working as drivers of many micro-opportunities in specific sectors: industrialization policies in developing countries and reindustrialization in advanced countries; diversification and relocation of value chains; the modernization of infrastructures in developing countries; regulation and regulations around circularity and sustainability, promoted by governments and by an increasingly energetic social demand; and the promotion of e-commerce.

Opportunities lie mostly in these factors rather than in countries, and you need to identify them in advance to take advantage. Companies can present themselves as victims of these changes or take advantage of them as a lever to modernize, innovate and advance to the competition ", explains the CEO of amec, Joan Tristany.

The existence of recovery plans in a large number of countries after the pandemic, well endowed and largely focused on industry, open multiple opportunities in many places. In general, in advanced countries there are aid programs for the acquisition of 4.0 machinery that can be provided by Spanish industrial companies. Likewise, they are carrying out a diversification and reshoring process that will also entail opportunities for those activities that wish to establish themselves in a market. However, emerging markets are also investing decisively in order to move from agrarian to industrial economies, and they need industrial equipment in fields such as textiles, food, but also in construction and infrastructure for cities. “You have to be alert and think not only about the funds and aid that will be given in Spain, but also in the rest of the countries. There will be a lot of new investments both in the European markets, as well as in the American and Asian markets, ”says Tristany.

To obtain the Market Ranking, the amec Index is calculated, made up of a wide range of indicators grouped into five pillars: Ease of Business, Governance and Resilience, Economic Projection, Business Environment and Market Capacity. These are joined by a sixth pillar, that of Sectorial Opportunity, which gives rise to different rankings for each industrial sector.

Bobst's Masterfold 75/110 folder-gluer is renewed
Incorporating new Bobst branding, the Masterfold 75/110 maintains its status as a fast and automated folding and gluing line. With very short setup times, the folder-enco ...
Aranow inaugurates its new headquarters and increases its production capacity by 80%
Aranow, a company specializing in the manufacture of single-dose packaging machinery, strengthens its expansion plans with the premiere of its new corporate image and a 4.100 m2 production center located...
HP brings the firmware for large format printers to León
León will be the nerve center for the development of the firmware of all the large format printers of the HP company worldwide. An announcement that reaffirms the multinational's commitment to Spain ...
Epson commits to the sustainable printing of color labels
Epson's vision for the future of printing is based on "combining the highest quality and productivity with the highest standards of sustainability and reduced environmental impact." One m...
Palletizing cell with Motoman HC20 Cobot at Verla-Pharm
Based in Bavaria, Verla-Pharm, a company specializing in medicines and dietary supplements, has chosen to use Yaskawa's Motoman HC20 palletizing cobot for the first time. The install...
A Tetra Pak solution reduces water use and carbon emissions
Tetra Pak has unveiled its new portfolio of UHT 2.0 heat treatment solutions and its new Tetra Pak® E3 / Speed ​​Hyper packaging equipment. These solutions respond to the needs ...