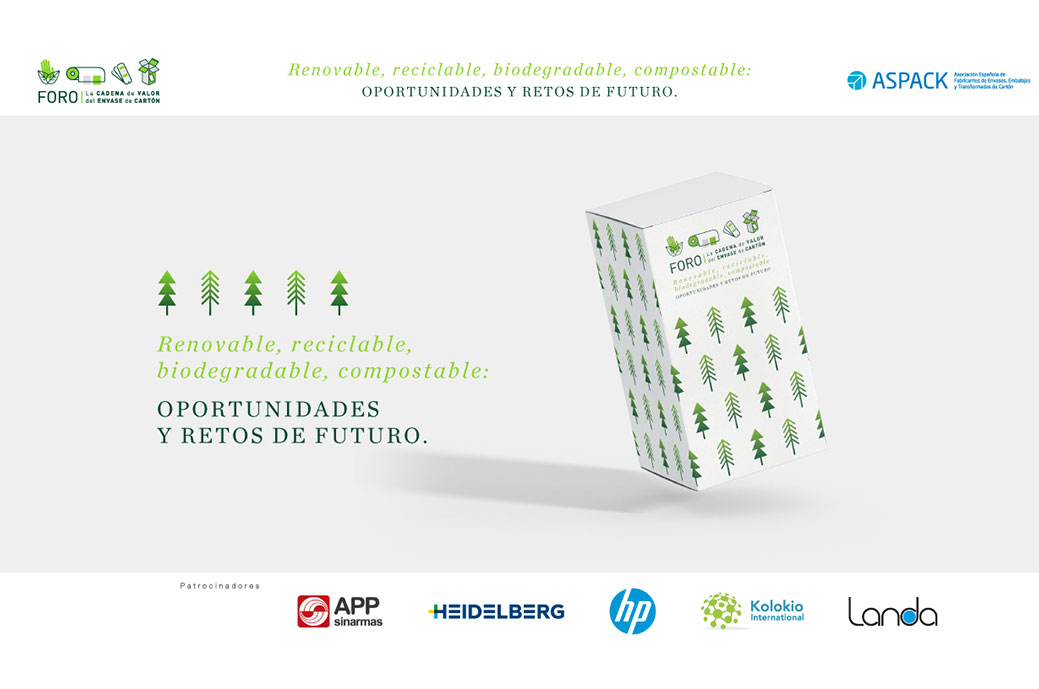 Under the title Renewable, recyclable, biodegradable, compostable, Opportunities and challenges for the future, the fifth edition of Carton Value Chain Forum by aspack It took place on October 28, had more than 100 attendees and was moderated by the journalist Gorka Zumeta.

During his presentation, Pablo Serrano spoke about the law on waste and contaminated soils and the latest study by ProCarton, where it is confirmed that 77% would pay more if they consider that the packaging is friendlier. He gave several examples of replacing cardboard packaging with plastics and commented on the projections to 2025, taking into account the legislative trend of eliminating plastic materials in packaging and the latest innovations in the cardboard packaging sector: 'the message we want to launch to brands is to plan ahead to be able to face the tense situation that currently exists in the market of cardboard shortages and increased prices of raw materials, energy and transport ».

The second presentation was given by Susana arranz, international and innovation director of Stanpay Lucía Jiménez, responsible for sustainability and standardization of Stanpa, which analyzed how the recently published draft of the Royal Decree on packaging and other transversal legislation affects the cosmetics and perfumery sector and what are the priority objectives for the sector.

Susana Arranz explained that the sector decreased by -10% in 2020, but that it has registered "+ 6,4% growth in the first quarter of the year." Regarding exports, «Spain is in the top 10 of world exporters. In 2020, exports of perfumes and cosmetics contracted by -16%. The data for the first semester are encouraging for the year 2021, "he added.

Lucia Jiménez commented on the current challenges of the sector and recalled the new European strategy towards the reduction of plastics. "We have to inform the consumer well, we have to take advantage of the ease of packaging to effectively inform the consumer himself" and "we need that communication with the value chain to be able to learn about and implement new materials, to be able to substitute plastic and promote knowledge and innovations to current and future challenges ”.

They ended their speech with the presentation of Feeling Innovation by Stanpa, an ecosystem for the entire value chain, where they have created 5 work groups, one on sustainability and the other on packaging, to make the new innovations known to the sector.

The last presentation was that of Paula Belt, sustainability technician of FIAB, who spoke about future prospects and challenges in the circular economy for the food and beverage industry, "which has been maintained", although the impact of the crisis in the hospitality industry has also had an influence. He commented on the new laws, stating that "there is hyper-regulation." In conclusion, he said that: "a suitable container brings many benefits but, above all, health protection and durability of the products, also avoiding food waste."

To end the forum, he congratulated himself on the award Procarton Young Designer Award 2021 awarded to the Argan Oil Pack designed by four students from Salesians of Sarrià. Raul Adame, One of the awarded students explained the origin of this project and the process to produce it.

The President of Aspack, Jose Ramon Benito, thanked the support of the event sponsors (APP sinarmas, Heidelberg, HP, Kolokio International and Landa) and closed the day "encouraging new generations to create and produce new products with sustainable materials and continue working the entire value chain codo with elbow for the improvement of the sustainability of the planet ».

Texen Beauty Partners shows the beauty of cardboard for Sothys
The Sothys brand palette is an example of Texen Beauty Partners' paper-and-board-based global eco-design approach. Sothys selected a maxi-format palette (18g) with an ele ...
Apis launches a more sustainable cardboard container for its fried tomato
The fried tomato Apis, from the Extremaduran company, Carnes y Vegetales SL, Apis Group, is already present in the Spanish market in a new container, Tetra Brik "plant-based", which produces less impact ...
A Tetra Pak solution reduces water use and carbon emissions
Tetra Pak has unveiled its new portfolio of UHT 2.0 heat treatment solutions and its new Tetra Pak® E3 / Speed ​​Hyper packaging equipment. These solutions respond to the needs ...
Estrella Damm eliminates the plastics that wrap packs of cans
Estrella Damm already produces all the packs of cans without the decorated plastics that wrap them, replacing them with packaging made with cardboard from sustainably managed forests ...
A corrugated cardboard bucket for hygienic removal of face masks
The use of masks during the pandemic has rightly grown to hundreds of millions around the world. However, they can easily end up littering public places or natural surroundings. Metsä ...
Diesel's metal rocket enters orbit thanks to Cosfibel
For the Only the Brave (Diesel) Christmas chest, Cosfibel took up the challenge of a complete eco-design approach. Composed of two parts, this tin chest has three clipped fins ...