XII National Awards for Design and Sustainability in Container and Packaging 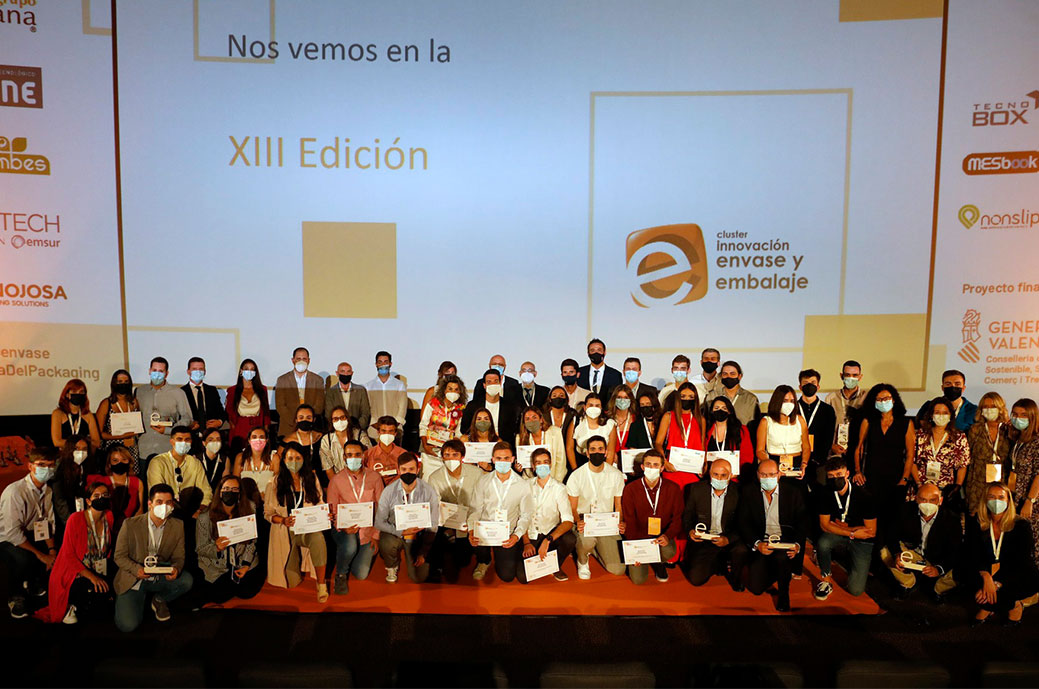 The winners of the XII edition of the National Packaging and Packaging Design and Sustainability Awards have already been announced at a gala held in Valencia. More than 200 attendees, including students and professionals, have attended the award ceremony for these Awards organized by the Cluster of Innovation in Container and Packaging, in an edition that also highlights the importance given to sustainability and well-being provided by the winning packaging.

The Awards have also had the collaboration of Innotech (Emsur-Coexpan Innovation and Development Center), Grupo Hinojosa, Esic, Grupo La Plana, Ecoembes and the ITENE technology center. Also with the support of Flexográfico, Biconsulting, Tecnobox, MESbook, Úpalet and NonSlip, as well as with the financing of the Department of Sustainable Economy, Productive Sectors, Commerce and Labor of the Generalitat Valenciana.

Danone, Carmencita, Verdecora, ITC Packaging, Grupo La Plana and Logifruit they have been the challenging companies that have raised real cases to the students.

Students from more than 28 Universities and centers have responded with their disruptive proposals, with more than 1.000 registered and 300 projects delivered. In addition, for the first time, the Awards have had the participation of a foreign invited center, the University of Monterrey of Mexico, who has received a special award for his collaboration.

Transport of living beings in ecommerce

Firstly, Greenheart has challenged participants to find a solution that would facilitate the shipment of plants after the rise of the ecommerce channel. The winner has been the project presented by the University of Zaragoza by Elisa Pilar Toyas, María Tello, Camino Pitalúa and Gerard Longán. A solution in which easy handling and protection in transport prevail, which provides the company with greater efficiency in the shipment of living beings such as plants.

A design that allows it to adapt to all types of plants, regardless of their shape and size, as well as to facilitate the entry of light. To ensure stability and provide resistance, it has an internal packaging adaptable to the different pots and easy to extract, which also incorporates a section for other products.

In the challenge proposed by ITC Packaging, the award went to him project 'Lov 2 Salsa' by Carlos Valero de la Universitat Jaume I. A solution whose design meets the requirements and objectives established by the company to guarantee the hygiene and safety of consumers when they share spreads.

A container inspired by the ancient art of origami with folds on the sides, which makes it open in the shape of a flower. Only a single biodegradable plastic material has been used for the packaging, which facilitates its recycling. In addition, it incorporates four shoulders of one color each that helps to identify them.

Here, the Accésit awards have been awarded to the 'Jester' project by Vanesa Carrasco, Miriam Egea and Pablo Pérez; and the 'Swap' project by Laura Checa, Marta Meyó and Guillermo Sánchez, both groups from the Polytechnic University of Valencia.

New lid that guarantees easy recycling of the container

About us Carmencita has proposed to the students a demanding challenge in which they had to create a lid for their existing traditional can of paprika, which would allow it to be separated from the metal in order to facilitate its recycling. For this challenge, the winners have been Irene Hinojosa, María Miedes and Javier Redondo de la University of Zaragoza and Polytechnic university of Valencia.

Your project is based on a sliding cover that meets all the needs of the company. It guarantees a high seal between the packaging components, it is easily separable for recycling, its unit price is within the established margins and it represents a unique and identifiable closure with the company thanks to its innovation.

On the other hand, Mario Moya, Araceli Rodríguez, Celia Sánchez and María Santiago from the Polytechnic University of Madrid; and Rubén Quevedo, Pablo Ortiz and Pablo Pérez from the University of Valladolid, have obtained a second prize in this category.

The challenge launched by logifruit was looking for the creation of a secondary and reusable container that allows the packaging, storage, transport and display in the supermarket shelf of dry products. In this category, the 'Lean' project by Diego Izquierdo, María Calvo, Pablo Torrijos and Eduardo Vea de la University of Zaragoza.

A container designed in order to enhance the product and attract the attention of the consumer, as well as display and organize it on the shelf. All this without forgetting the transport of these and their application in different dry products, such as snacks and pastries.

In this challenge, the 'Kotak' project by Ángel Lobo, Eduardo Alcoitia, Samuel Bustos and Miguel Manjón from the Polytechnic University of Madrid has obtained the Second Prize; and 'RE-standard box' by Darío Pablo Coloma, Ainara López, Marcos Chanca and María Sanz from the University of Zaragoza.

Packaging that facilitates the independence of children

Danone has raised a challenge to create a new packaging aimed at the smallest of the house, given the recent trend where it is observed that children are increasingly aware of their diet and more independent. The winning project has been 'Danonino Rolled' de Andrea Porras, Julia Valero and Martín Rivera of the University of Valladolid.

A yogurt container that allows maximum facilities to the smallest of the house in terms of grip, transport and consumption. Thanks to a plastic piece at its lower end, consumers will be able to roll up the container, making yogurt consumption different and fun, while making the most of its content.

In this category, the second prize went to 'Yogunino' by Marta Wucherpfennig from the Polytechnic University of Madrid; and for 'DanAway' by Ángela Abejez, Blanca Ascaso, Rosa Aurensanz and Marta Huguet from the University of Zaragoza.

Alternative to the plastic seal for closing boxes

And finally, the La Plana Group in this edition has challenged the students to create a solution that would avoid the use of plastic seal when securing the closure. In this case the winning project has corresponded to 'Bloco ' by Sergio Almena, from the School of Art and Design Superior of Segovia.

Bloco is a container formed by a cleft flange, allowing that when closing the box this flange is bent through the gaps and allows a highly secure closure. Once the container is closed, the pull of the cardboard itself causes the fold to unravel, preventing the flap from coming out of the slot again.

In this category, the second prize went to 'CincBox' by Marta Chiva and Victoria Lupiáñez from the Universitat Jaume I; and 'EKO-BOX' by Irene Hinojosa, María Miedes and Javier Redondo University of Zaragoza and Polytechnic University of Valencia.

Also, to seek that link between the business and economic world, the Cluster Quarry Plan Award For which one of the participating students has received a scholarship from the Container and Packaging Cluster for the completion of the Master in Management [MBM] taught by ESIC Business & Marketing School. The winner has been Maria Miedes Serna, student of the University of Zaragoza.

The Scholarship for the winning student is for the total tuition for the course, valued at € 21.200. In addition, during the duration of the Master, he will carry out internships in the Container and Packaging Cluster.

Winners of the 9th iDermo Awards
On Wednesday afternoon, the long-awaited 2022 iDermo Awards gala took place in the La Pedrera auditorium in Barcelona. An event with the character of a whole festival of Dermocosmetics and...
Grupo Calvo presents the innovation «Vuelca Fácil»
Grupo Calvo has presented the innovation project "Vuelca Fácil", with which it introduces a new way of production, packaging and consumption of tuna, more efficient, sustainable and adapted ...
Novell Cafes, WorldStar for Packaging 2020 Award
The WPO (World Packaging Organization) organized a virtual ceremony for the winners of the WorldStar 2020 special awards and student awards. The WorldStar for Packaging awards ...
Prize for the Miss Dior Rose Essence case
The Miss Dior Rose Essence coffret is a chest of drawers that is made up of a sleeve and an insert. Parfums Christian Dior chose DS Smith as the supplier for this special case. The inse...
Stout Boom in Vacuum Metal Silver Lux, voted Best Beer Label
The project with the designer Andrea Basile (BasileADV) and the calligrapher Giuseppe Salerno (Resistenza) was to develop a label for a new product line, an immediately recognized connection ...
Cruzcampo and Amstel triumph at the World Beer Awards 2020
Like every year the World Beer Awards have put hundreds of brewers around the world to the test. This year more than fifty countries have participated, whose judges tested and scored blindly in three ...